Today we test new waters.  We move from the sublime to the granular—from sweeping comments about waking and non-waking states, to a technical introduction of the Ascendant and its role in the hands of the Astrologer.

When the editors at AF began studying astrology in the late 1960s every angle of every constellation and the span of every house in the horoscope required a calculation performed by hand.  We relied on the printed Ephemerides to define the Greenwich Mean Time location at noon for two luminaries, the Sun and Moon, and eight planets: Mercury, Venus, Mars, Jupiter, Saturn, Neptune, Uranus and Pluto.

Astrological charts are now articulated in seconds with software. It is possible, today, to be a student of astrology and never construct a chart from scratch. Is this good? In the hands of a competent driver the automobile remains serviceable, yet no one works on them anymore; perhaps there is some parallel to be inferred with the astrologer’s reliance on the computer. The AF is agnostic about the value demonstrated by knowing how to correctly apply the mechanics leading to horoscope construction (we think).  We admit to some ambivalence on this point.

We shall not rush, but rather move deliberately to describe topics important to understanding the structure and intelligibility of the horoscope, case in point: the Ascendant. First, we begin with some rudiments about the Sun, Moon and planets.

We start with the luminaries. The Sun and Moon are nearby celestial bodies—and they are not planets.  Each is considered a luminary—one radiates and the other reflects light.  One represents waking awareness, the Sun; the Moon, the dimension we indwell in a non-waking state.

It is hard to imagine life in this world without the Sun.  We must not think about the Sun, thereby, as separable from our daytime incarnate experience.  It is hard to imagine the tides of every ocean in this world without the Moon, nor do we think about the Moon as separable from our nighttime incarnate experience.  The Sun and Moon, symbolically speaking, are not separable.  Remove one—and the existence of the other is forever changed or lost altogether.  While they are not separable, they are not proxies one for the other.  There is little one could describe as ‘democratic’ about the archetypes and their potency that comprise the landscape of the psyche.  The Sun and Moon comprise a system.  To speak of one is to invoke the other.  A common object, as bowl, allows us to observe a system at work: it is not possible to consider what we mean by bowl without reference to both its concave and convex form; the integrity of the bowl, its unity as form, is plural.  Similarly, the luminaries comprise a symbolic integrity of Mind the identity of which is plural.

In Astrology we will observe over and over the following maxim: it takes two to make one.  Among higher animal phyla, viz., mammals, Nature is so configured.  While gestation rates vary, it takes two to make one.  The pithy phrase, “as above so below” may apply.  Now, if we add to this, “G-d* is something Nature hath not made”—one begins to sense the beauty and the mystery of incarnation as an extension of creation but not its proxy.

* [Omitting the letter “o” to complete the spelling of “God” was deemed an act of hubris and thereby to be avoided. The humbler abbreviation, “G-d”, for millenia–was the convention.]

Forgive the digression. Back to the luminaries.

We observe the Moon to reflect the Sun.  The domain of the Moon thereby includes the Sun, and not visa versa.  It is not possible to observe the Sun and infer the Moon. Does this mean the non-waking state represented by the Moon “includes” the waking state represented by the Sun? Answer: Yes.  The womb is antecedent to the birth.  There may have been creation before Creation…and it was lightless (and likely, quiet).  This is counterintuitive and quite important.

There are other suggestions within the corpus of astrology that reinforce this premise—how the lightless Moon holds the Sun and not the other way. In the traditional cycle of the Zodiac, the sign Cancer follows Gemini as it precedes Leo before we engage Virgo.  The Moon, as ruler of Cancer, precedes the Sun as ruler of Leo. The Moon and Sun are bounded by two signs each ruled by Mercury (Gemini and Virgo).  Mercury has a neutral charge.  The luminaries are set apart within the cycle of the zodiac by neutrality.  The energetic of the Moon-Sun complex must derive from their symbolic inseparability.

The imaginal aptitude we hope to nurture in the heart and mind of the AF student can be observed as the capacity to sense and enjoy the delight available to us as counterintuitive experience.  In later posts we will learn how the counterintuitive event hints at liminal space—a special boundary of peripheral consciousness accessible to angels and the Trickster as helpmates.

If there were no Moon would the Sun burn more brightly seeking its reflection?

The horoscope is illustrated as a circle below.  This particular image demonstrates the Sun and Moon as inseparable.

The next example of the horoscope demonstrates a horizontal axis—a line running left to right across the horizon.  The other lines represent different houses within the horoscope—but our attention, for now, is limited to the horizon.

Now, take a look at the traditional designations of the compass.  Note—North is at the top, South the bottom, West is on the left horizon and East, the horizon to the right. 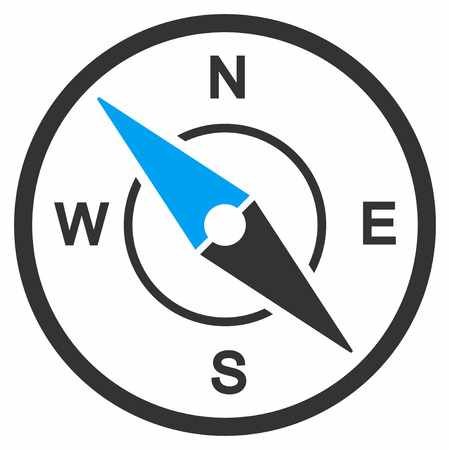 The Astrological Ascendant is defined as the zodiacal sign that was “ascending” on the Eastern horizon at the time and location of a specific event—a birth time, for example.

In the counterintuitive world of the hermetic tradition, EAST is located on the left horizon, not the right.  West is on the right horizon.

The Ascendant is always marked by the East horizon.  Let it sink in.  Returning for a moment to the luminaries—the Sun is associated with the direction “right”, “left” belongs to the Moon.  If the Ascendant is East, but on the “left” horizon—does the fundamental construction of the horoscope signify a key role for the Moon—and the non-waking lightless state?

Much to learn.  We bid you peace through practice.

If you would consider listening to some music to prepare for this lesson, we would like to suggest “Panis Angelicus” as sung by Pavarotti and Sting.  It is a 3:45 minute rendition to be found on Pavarotti –the Duets, at iTunes.